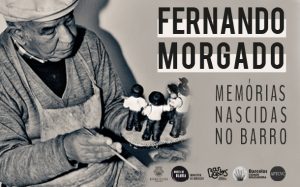 Born in Galegos (Santa Maria), on October 15, 1927, son of Américo Morgado and Ana de Jesus Correia de Abreu, both master artisans in the arts of molding clay. His origins were the engine for clay to become a constant presence in his life, since his childhood. His long history is now 94 years old, full of adventures, so many, that we have to sift through them a little to immerse ourselves in the true spirit of the potter.

His journey with clay begins at the age of 12, to help his family. Thus, he will work for  two of his older brothers, painting imagery pieces and crockery that would be sold in markets. He added experience and shortly afterwards he started to be called by other potters of the region to paint imagery, earning for each piece. It was at this stage of his life that, not rarely, he painted Barcelos roosters for Domingos Coto, a notable Barcelos craftsmanship master and, most likely, the first to make the Barcelos Rooster on the potter’s wheel. At the age of 24, in 1952, he emigrated to Brazil, where he joined a brother, with whom he would work in a ceramics factory in the municipality of Niteroi, in the State of Rio de Janeiro. In this factory, more precisely in 1954, shortly before settling down on his own, he made his first imagery piece – the bust of his father. However, until he returns to the imagery production, several decades will pass. It was also in this year that he founded, with his brother, the decoration company “Cerâmica Artística e Regional”, dedicated to the production of water filters, vases and other decorative ceramics. The death of his father in 1962 precipitated his return to Portugal the following year, but he did not come back without first marrying Palmira Duarte Silva, a Portuguese woman, from Viseu, also emigrated in Brazil. Back in Barcelos, it was once again the clay that gave him the means to support his family and raise 5 children, through the establishment of the company “Decorações Canta Galo”, active between 1963 and 1990, in the production of tableware and decorative ceramics. The end of his business activity, in the demanding field of ceramics, was dictated by health issues. Therefore, he became a retired man, but this would not take away his passion for clay, on the contrary, he became exclusively dedicated the art of his heart – Imagery. He went on to create objects that pictured the world around him, such as religious motifs, folklore, professions, rural scenes and many traditions. He is probably one of Barcelos craftsmen that best portrays the theme of traditions and the rural world in Minho. It is a unique work, all done manually, baked, painted by hand and widely marked by the expressiveness it communicates, as well as by the use of tones of nature, where pastel colors predominate.

Today, he keeps in his house, which is located right next to the one where he was born at the beginning of the 20th century, hundreds of creations that reflect the last two decades, when clay, in his hands, started to tell stories, which are of the purest Barcelos Imagery. At the dawn of 2022 and at the age of 94, Fernando Morgado, who was born with clay and made his way of life out of it, no longer produces his much-loved imagery, which he stopped producing in 2019, when his hands gave in to wills of age. However, creativity, added to his prodigious memories and resilience, remain absolutely intact. Not long ago, in the course of an interview, when asked which phrase best characterized him as a man connected to pottery, he replied “WE WERE BORN FROM THE CLAY AND WE SURELY DIE IN THE CLAY”.